There is no doubts that the music band ATP represents original Slovak rock music. In our music production occurs mix of elements from various music genres. For us band members was clear from the beginning that we want to compose our own music without having a fear of doing music experiments and mainly to play what we like. During our music career in our band has exchanged a number of great and creative people who brought their unique music ideas. Thanks to this fact is each album specific - both in music as thematic e.g. lyrics. Get inspiration and listen to the cornerstone of ATPmusc history! Our free music right here!

Music band ATP was founded in the year 2006 under the name "Panta Rei", later the name of the band was changed to ATP according the given names of its three founders Adam, Tomas, Pavol. Till now four studio albums has been released: ATP I (Heavy metal), ATP II (Hard-rock, Grunge), ATP III (Rap-rock, Hip-hop) and "The best of ATP 2008 - 2012". Our newest EP called ATP IV - In the Game was officially released 26.9.2015 and contains five original tracks. On mentioned albums were also participating: Tibor Schmidt (Bass guitar in ATP II), Jan Kovac (Keyboards in ATP III), Gabriel Szelle (drums in ATP IV - In the game). The first official video is released in 2012.

The lead guitarist and founder member of ATP band, he participated on composing every ATP album with Pavol Stanko. Except ATP band he is nowadays working on his own solo music project called Tomas Schmidt - The Essential

The founder member of ATP band with Tomas Schmidt as bass guitarist, drummer and singer participated on composing every ATP album. Except ATP band he is nowadays working on his own solo music project called HomeStudioPS

As a drummer he is cooperating with ATP on recording the new EP called: ATP IV - In the Game

As well as Tomas Schmidt and Pavol Stanko is the founder member of ATP band. After the first album ATP I was recorded, he decided to leave the band and start his own music way. As a drummer he is now playing in the band called Beton.

Singer who joined the band after Adam Hladky had left. Samuel participated on the second ATP studio album - ATP II in the year 2008. Nowadays he is occasionally doing music activities.

As a second guitarist joined the band Michal Kovar in the year 2009 and was participating on the third studio album ATP III. Nowadays he is occasionally doing music activities. 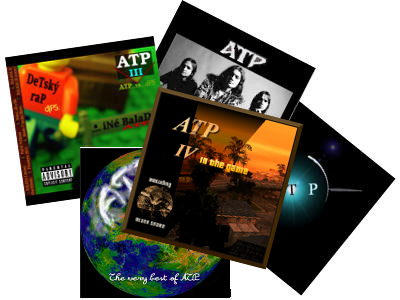